I did everything wrong. But I finally did it. I added a puppy to my growing family in my shrinking apartment. Since moving back to NY from LA many moons ago, I have longed for a dog. In fact, I “borrowed” a woman’s springer spaniel that I offered to drive from LA to Austin, TX on my cross country return to the Empire State because I simply longed to have a K-9 companion. Two weeks ago, after months of obsessing over to what my boyfriend referred to as “puppy porn” (i.e. photos on eBay Classifieds listings for available dogs and saved searches on Petfinder.com and Adoptapet.com), I decided it was time. Surely, if after six years, I still wanted a puppy so profoundly, then I needed to take the next step. I decided a long-haired chihuahua  was the right breed, particularly since my boyfriend has a fondness for Chihuahuas, and found the sweetest photo of a brown-haired, blue-eyed puppy located just outside of Albany. I thought it would be the perfect way to go about things, particularly since small breeds in the city are quadruple the price of puppies out of the tri-state area. I had considered adoption, but after multiple attempts to contact rescue agencies and never hearing back, I thought a young puppy would be ideal to acquaint with my cat and the confines and energy of urban living. Primarily through email, I contacted the breeder and we arranged to meet in a Walmart parking lot. It was another ill-advised idea, to not see the home and parents, but I thought I would trust this seemingly nice lady from upstate NY. The moment I saw the puppy, I thought, “There’s no way this guy is going to be 4 pounds,” which his parents were allegedly supposed to be. Why I was obsessed with having such a tiny pup was built around my utmost fear of being unable to take care of a bigger dog in this city. In Manhattan there are three things that take a greater capacity of commitment than anywhere else in the country: owning a car, being in a relationship, and owning a dog. And in the past year I have managed to add two of these to my formerly solitary existence.

So I went upstate and borrowed my mother’s car to drive to a Walmart I had not seen before, nervous and sleep deprived, and thought there was no way I could not take home this puppy. This was my plan in action and any deviation from the plan and I would not follow through. I met with a rather terse, older woman in a white conversion van (really, people still drive those?) and looked at the vet records as this little puppy nestled into my neck, his eyes begging me to take him home (or to not drop him). A little girl in the back of the monstrous van looked out the window, seemingly sad to say goodbye to the little guy and I asked one last time, “Are you SURE his parents are both four pounds? He won’t get much bigger?” She insisted he was 1.5 pounds, perfectly in alignment with the Chihuahua growth chart. Of course, this was a bunch of bullshit. The moment I got my pup on a scale, he was already at 3.2 LBS. My obsession over his weight became the equivalent of a madame at a ballet company, weighing in her dancers on a weekly basis. It began to exemplify my fear of responsibility as I became terrified with the notion that I owned a fucking dog. No, really, I had finally done it. Those daydreams of moving to Vietnam for a year to teach English were suddenly trumped by my puppy porn addiction that manifested into this little furry puppy, crying behind a crate door on one of the most harrowing nights of my life. My empathy vanished and I became a sleep-deprived, heartless Cruella Deville, thinking he should just shut up and go to sleep and get over the fact he would never see his brothers and sisters and mother again.

Everyone who met this little guy thought he had such a sweet personality. The first day amounted to zero accidents, which indicated he was clearly paper trained, and he was friendly with every child that approached him. I, on the other hand, after three sleepless nights, posted an ad to find him a new home. My method of transit was now changed, and no longer would the bus or Amtrak be my traveling ally as neither are pet-friendly. So with the new routine, my brother offered to drive me and the pup to Metro-North in Poughkeepsie, an additional twenty minutes from my typical drop-off point and I repeatedly told myself that I could not possibly be a good dog owner. We drove halfway to the station before my father called to inform us that a fire had consumed the bridge connecting the Metro-North trains from the Bronx to Manhattan and all service was cancelled indefinitely. I thought it was an omen- a surefire sign that I was not meant to keep this dog. So as I was upping my financial offers to my brother, crying that money was no object if he could drive me to my front door, an MTA update appeared on my phone and said all riders could take the train to Yankees Stadium and transfer to a subway into Manhattan.

I was devastated the whole ride back to the city, looking at the silent, big-eyed puppy in the crate and wondering how I could pull this off. Even though my building had recently become dog-friendly, I had not consulted my elderly, temperamental landlady. Every possible disaster overwhelmed my mind and was intensified when I arrived to the Bronx and was informed that my “short” walk to the subway was nearly a mile walk up a series of hills. I schlepped the dog carrier, garnering the looks of every pedestrian in the neighborhood who would stop and peer into the crate, remarking on how cute my dog is. I was near collapse when I made it to the subway station, as this poor puppy had exhausted three forms of transit in a single day.

I arrived at my apartment the exact moment my awesome boyfriend arrived, bringing my frenetic energy to a more livable pace and by the look in his face I knew he was already going to fall for this puppy. With my fear of commitment, he named the puppy Jack. My cat, who I feared would go insanely vicious at the site of a K-9 intruder, simply ignored him and gave him a few sniffs. He passed yet another of my potential deal breakers: the Scarlett test.

And yet, I still panicked and decided I would call my landlady and ask for permission. I secretly hoped that she would free me of the guilt of my projections that I could not adequately provide a home for this puppy and insist that I get rid of him. She instantly became shrill and defensive, arguing that I already had a cat and that her other tenants with dogs were simply exceptions. I offered to bring the puppy to visit and she got excited, urging me to wait a half hour and then bring him. I was not in her apartment for more than a minute before she declared, “How can I say no?! He’s so cute and small. Of course you can keep him and I want him to visit and take him for walks! I want a dog so badly but my family said ‘no’ because if anything happens to me, they don’t want to care for an animal.” Of course, in spite of her enthusiasm, she insisted on wanting an additional $1100 deposit. I’m going to see how avoidable that is in the future.

So with every sign pointing that I was meant to keep this dog, and the undeniable love in my boyfriend’s eyes whenever he catches sight of Jack, and the exercise his energy has brought to my often-too-dormant cat, I slowly began to let my guard down. I’ve accepted the fact that my dog will probably not be four pounds and will grow to a whopping 9-10 pounds. I may have to eventually leave my small and cozy apartment on the UWS in favour of a cheaper neighborhood with more space. But after a few nights of semi-normal sleep, after the terror-filled nighttime screams of a scared puppy subsided, and after I took stock of all the many positive changes in my life, I began to feel better. I began to feel capable again and committed to giving this dog the best home that I can. Because as much as we worry, as much as fears take hold and challenges seem inescapable, it’s all quite transitory. And I would not be happy if this need for a dog had not been satiated in this lifetime. As much as I hate labels and to feel tied to anything, as much as I identify with running around like a scarve-wearing gypsy, the facts of my life are the following: I am a girlfriend, I am a dog owner, I am a cat owner, and when I really look within I see that I am truly happy. 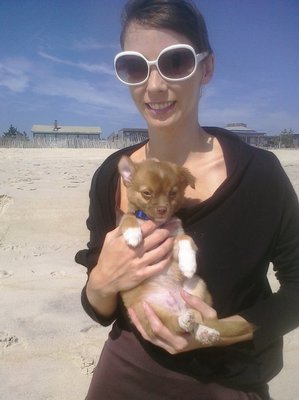